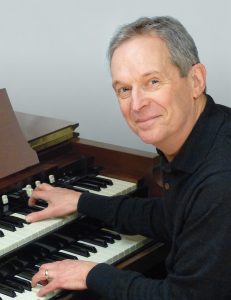 Alan S. Lenhoff’s career as rock musician ended abruptly at age 18, when he realized his best talents lay elsewhere. He quit a band with a small-time recording deal, and enrolled at the University of Michigan. Because he didn’t trust himself to stick with this decision, he made sure there was no turning back: He disposed of all his keyboard gear before he moved into his dorm room. Since then, he has worked as a reporter, columnist, editor, and executive at four US newspapers, including the Detroit Free Press, and as a magazine publisher. His writing has appeared in many major American newspapers, and he has won numerous awards for investigative reporting, political writing, and business reporting. Decades after his last on-stage appearance, when he decided it was finally safe to risk recidivism, he started collecting, restoring, and playing many of the keyboard instruments celebrated in this book. He lives in Birmingham, Michigan, with his wife Pamela, who shares his interests in cycling, hiking in the mountains, and making music.

David E. Robertson AM is an industrial designer, commercial photographer, and design historian from Adelaide in South Australia. He established the design consultancy Icarus Industrial Design in 1985, which provides new product development, graphic design, web, and marketing services to manufacturers and other businesses in Australia. The consultancy has provided an outlet for his training in industrial design and for his hobbies such as photography, writing, model making, and woodwork. A lifelong interest in music gradually evolved from school choirs and stage performances to playing and singing in rock and dance bands as an amateur pastime. Along the way he developed an interest in the role and influence of keyboards in contemporary music and started to collect and restore instruments to explore their design, construction, and sounds. In 2009 he was inducted into the Design Institute of Australia’s Design Hall of Fame for his work supporting and promoting professional design services and the professional design network in Australia. In 2014 he was honored as a Member of the Order of Australia for services to professional design and innovation in Australia.